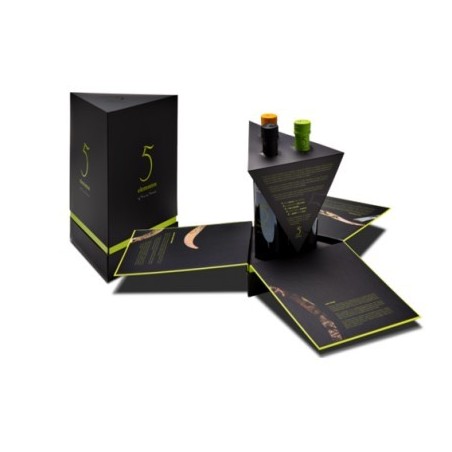 A wonderful gift idea for anyone who deserves a little pampering. Someone who appreciates the high quality of Extra Virgin Olive Oil and can enjoy its flavors: intense, like picual variety; great personality, like cornicabra variety, without forget the superb sensorial experience of "Blend Secret Premium".

The selection of the best Extra Virgin Olive Oil, internationally awarded in New York International Olive Oil exhibition, the most important fair in the world about Olive Oil. Only the best are there.

Extra Virgin Olive Oil 100% olives selected at optimal moment of ripeness, is characterized by its light olive fruitiness. Its pleasant aroma has notes of plant stem and leaf. In mouth, bitter and spicy, has a final aftertaste of almonds and nuts.

Obtained directly from olives and solely by mechanical means. Cold extraction (<27 °), directly from the tree to the mill in just minutes since harvest.

Extra Virgin Olive Oil has an extremely high content of oleic acid, vitamin E, polyphenols and antioxidants, which endow them with great resistance to oxidation, while posing extraordinary health benefits.